The work of the Welsh artist Will Roberts is ineffaceably associated with the landscapes, the communities and the people of South Wales. Whether painting farming or industrial scenes, Roberts’ diverse art examines with precision and compassion the condition of the human figure embedded in these respective environments. Eschewing sentimentality in his work, Roberts explores and reflects, with an authentic domestic voice, the realities of life in a period which witnessed seismic changes affecting all aspects of society.

Roberts studied at Swansea Art School but his personal circumstances dictated that he develop his art whilst working as a jeweller and watchmaker although the meticulous skill intrinsic to honing these crafts was also to find expression in his growing artistic output. Following a period of war service, Roberts was introduced to the Polish artist Josef Herman and their friendship was to play a significant role in the artistic evolution of both men. A shared appreciation of the work of Fauvist Georges Rouault helped to forge a relationship which became deep-rooted and mutually beneficial besides influencing the stylistic direction of the burgeoning expressionist.

Fittingly, the work of Will Roberts is represented extensively in public collections in Wales including the National Library; the Arts Council of Wales and the National Museum and Galleries of Wales. In addition, during his lifetime Roberts was the subject of numerous solo exhibitions, including major shows in Cardiff and London. Recognition of his growing status as a major Welsh painter was underpinned by a retrospective of his work at Oriel Mostyn, Llandudno, in 1993. 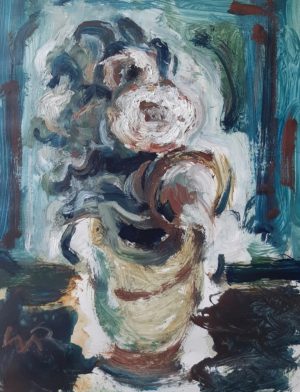 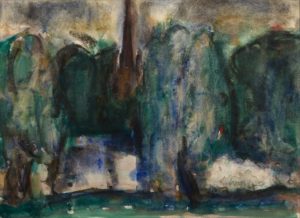