Vaughan was born in Selsey in 1912 and attended Christ's Hospital school. He received no formal instruction in art, but was apprenticed at the Lintas advertising agency, which gave him some understanding of form and composition. During this period he painted small artworks, leaving Lintas in 1939 to paint full time, a career that was interrupted by the outbreak of WWII.

Vaughan registered as a Conscientious Objector, eventually ending up as an assistant and interpreter at a German POW camp. His first exhibitions took place during the war. In 1942 he was stationed at Ashton Gifford near Codford in Wiltshire, and paintings from this time include The Wall at Ashton Gifford (Manchester Art Gallery).

Also during the war Vaughan formed friendships with the painters Graham Sutherland and John Minton, with whom after demobilization in 1946 he shared premises. Through these contacts he formed part of the neo-romantic circle of the immediate post-war period. However, Vaughan rapidly developed an idiosyncratic style which moved him away from the Neo-Romantics. Concentrating on studies of male figures, his works became increasingly abstract.

Vaughan worked as an art teacher at the Camberwell College of Arts, the Central School of Art and later at the Slade School.

Vaughan is also known for his journals, selections from which were published in 1966 and more extensively in 1989, after his death. A gay man troubled by his sexuality, he is known largely through those journals. He was diagnosed with cancer in 1975 and committed suicide in 1977 in London, recording his last moments in his diary as the drugs overdose took effect.

The centenary of Keith Vaughan's birth was celebrated with an exhibition at Pallant House Gallery in Chichester, 'Keith Vaughan: Romanticism to Abstraction' (10 March to 10 June 2012).

His auction record of £313,250 was set at Sotheby's, London, on 11 November 2009, for the oil on canvas Theseus and the Minotaur, previously in the collection of Richard Attenborough (who bought it in 1967). 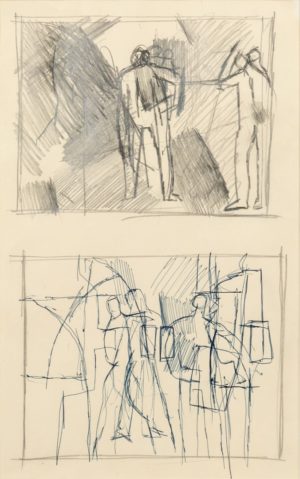 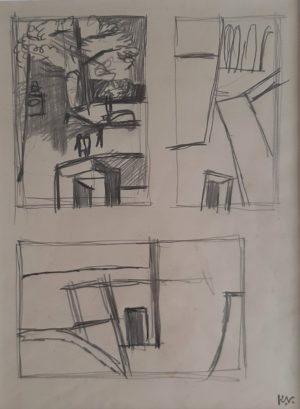 Prospect from a window, circa 1940