Milnes-Smith’s paintings in the 40’s were in a representational style, but he rapidly moved towards abstraction and by the late 1950's Milnes-Smith's painting had become more emotional and gestural in response to the influence of the Abstract Expressionists.

During this period he began to produce collages, combining torn scraps of printed and plain paper with crayon lines. He used found objects such as old gallery invitation, paint charts, and fragments of documents.

He participated in many group shows throughout the 1950's, including the London Group, The Institute of Contemporary Arts, The Redfern Gallery, Lords Gallery, The Artists' International Association and 'British Abstract Art' at Gimpel Fils. In 1958, Milnes-Smith was included in 'British Abstract Painting' at the Auckland City Art Gallery, New Zealand.

In 1961, he was one of 'Eight British Artists' that exhibited at the Jefferson Place Gallery in Washington, D.C. which included artists Terry Frost, Patrick Heron, Peter Lanyon, Alan Davie, Elizabeth Frink, and Jack Smith.

In 1963, he had his first solo show at the Drain Gallery, where he continued to exhibit for over 20 years. From 1983 to 1986 he exhibited at the RA summer shows and in 1990 a retrospective of his work was held at Austin Desmond Fine Art. 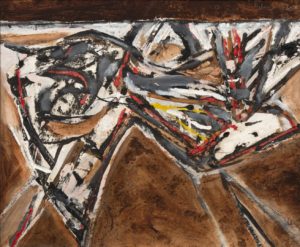