Sinnott was born in Sarn, South Wales to Irish parents. One of his best known paintings is "Running away with the hairdresser" (1995), which is housed in the collection of the National Museum of Wales in Cardiff.

Sinnott has also exhibited internationally at Jan Turner Gallery, Los Angeles, Roger Ramsey Gallery, Chicago and Bernard Jacobson, New York. Following on from these exhibitions Sinnott's work was acquired by major collections including the Metropolitan Museum of Art, New York, the Arts Council of Great Britain, the Royal College of Art, London and the British Museum, as well as, private and corporate collections worldwide.

Sinnott returned to Wales in 1995, where he now lives and works. In 2008 his bibliography was published entitled ‘Kevin Sinnott, Behind the Canvas [Published by Seren Books] Wales. 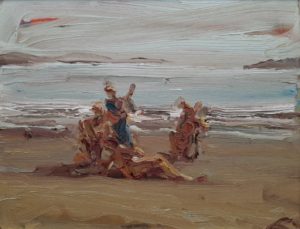