Padraig MacMiadhachain (pronounced mac-mee-a-hon) was born in Ireland, l929, and lived for the latter part of his life, over 40 years, on the Isle of Purbeck, Dorset.

He was awarded a travelling scholarship to both Moscow (1957) and Poland (1960), one by the British Council and the other by the Russian Government.

To celebrate his 70th birthday, in l999, he had a retrospective exhibition at The Molesworth Gallery in Dublin, Ireland. In 2000 his works were selected by Mary Fedden to be shown in "Fedden's Choice", at Lena Boyle Fine Art. This exhibition included Fedden's work together with works by three of her favourite artists.In May 2001 he had another very successful solo exhibition at the Molesworth Gallery, Dublin, of his Irish landscapes.

Quote from Padraig MacMiadhachain: "I have painted all my working life; I love painting, and I have managed to live by it. I make some good paintings and loads of rubbish too (hopefully you won't ever see the latter). I seem to have two moods in working ; my usual love of pale greys and warm blacks that are all around me in Dorset and Cornwall, my lifelong fascination with fishing harbours and all their, to me, lovely smells (which I cannot paint). ...and the colour and buzz of Buenos Aires and their ice cream and its fantastic colours, these bright colours have carried over into my recent paintings made in St. Ives and elsewhere." 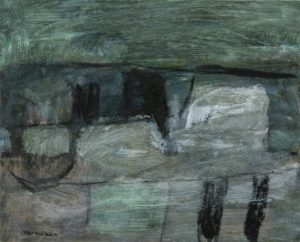