The artist John Houston contributed greatly to the cultural life of Scotland over the last half-century, through his bold, expressionistic painting and his long commitment as a teacher to several generations of students at Edinburgh College of Art.

With his wife, the artist Elizabeth Blackadder, he travelled extensively, but the land and seascape of his home country became his greatest stimulus. Occupying an age in which artists have largely turned away from traditional subject matter, Houston was resolute in his commitment to an art based on direct observation, from which he produced paintings conveying an extraordinary range of emotion. He had begun as a student at Edinburgh College of Art in 1948 and his interest in painting quickly grew within the hard-working environment of the college's school of drawing and painting, headed by William Gillies, who was an exemplary landscape painter.

Postgraduate and travelling scholarships allowed Houston to extend his studies, and together with his fellow student the artist David Michie (who became a lifelong friend and with whom he later shared the Royal Scottish Academy's prestigious Guthrie Award), Houston spent the winter of 1953-4 in Italy. As well as visiting the great museums in Florence and Milan and pursuing the work of his Italian contemporaries, Morandi and Sironi, in the private galleries there, Houston made drawings and subdued gouaches of the Italian landscape, beginning to establish an approach which would underpin the subsequent development of his art.

Houston began his teaching career at Edinburgh College of Art in 1955, and in the following year married his fellow Edinburgh student, Elizabeth Blackadder. Throughout his professional career, Houston managed to combine teaching with a prodigious output as an exhibiting artist, a workload which he felt able to sustain because of he and his wife's equal commitment to art, and the loving support received from Elizabeth through more than 50 years of marriage. Houston's first solo exhibition was held in 1957, in the 57 Gallery in Edinburgh. This was followed in 1960 by an exhibition in the city's long-established The Scottish Gallery. From then on it was possible to follow the painter's development through the regular, almost annual, exhibitions he held there.

In all his art Houston felt a need, akin with most Scottish painters of the 20th century, to maintain a connection with the real world. In the mid-1960s he started painting the human figure.

International recognition came in 1969, when he was appointed artist-in-residence at the Prairie School in Wisconsin under the wealthy patronage of Mr and Mrs S Johnson (of Johnson Wax).

On his return to Scotland he started to paint atmospheric paintings, of the sea and sky around Harris in the Hebrides. His paintings were a highlight of the annual exhibitions of the Royal Scottish Academy (of which he was made an Academician in 1972) and of the artist's continuing exhibitions in Edinburgh, and also in London and internationally.

In 1986 he was commissioned to paint a portrait of the conductor Sir Alexander Gibson (Scottish National Portrait Gallery), and he also completed more informal portraits of himself and his wife, and painter friends such as John Bellany. In 1989 he retired from Edinburgh College of Art and in the following year was appointed OBE. In 2004 he was awarded an honorary degree by Edinburgh's Heriot Watt University, and in 2005 another, from Aberdeen University.

In 2005 a retrospective was held at the Scottish National Gallery of Modern Art. He will be remembered and greatly missed as one of the most original interpreters of the Scottish landscape of the 20th century, as well as for his modesty and gentle charm. 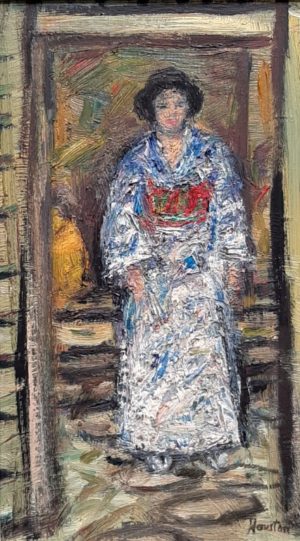