Scottish by birth, George Rowlett attended Grimsby School of Art before undertaking further study at both Camberwell and the Royal Academy respectively. Whilst undertaking his academic training, Rowlett was taught by two of the most prominent and influential figures in postwar British art, Frank Auerbach and Euan Uglow, although his artistic accomplishments unquestionably also reveal the influence of Van Gogh and Ivon Hitchens on his sensibilities and work.

Rowlett’s work evinces a sense of exuberance and richness which radiates beyond the apparent subject, thus suggesting a dedication to the process of painting as much as to the landscape itself which he nonetheless depicts so tenderly. As such, the sheer physicality and malleability of the paint in turn becomes the landscape for an artist focused on rendering his own ‘layers of experience’, whether sentient or subliminal.

The paintings of George Rowlett have been exhibited widely in solo shows across the UK and internationally whilst his work has also featured in many mixed exhibitions including regular representation at the Royal Academy Summer Exhibition. He was artist in residence at Brantwood, the one time home of John Ruskin, and has been the recipient of a number of major art awards including the Lynn Painter-Stainers Prize, awarded by Mall Galleries, London. Rowlett’s paintings feature in numerous public collections, notably the British Council, the Nuffield Foundation and the University of St Andrews, amongst many others. 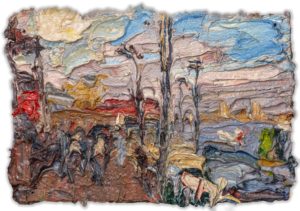 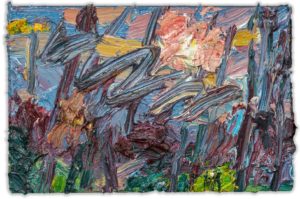