Peter Prendergast was born in Glamorgan, South Wales, in 1946 and it was the landscapes of the Welsh principality which were to become indelibly associated with his distinguished artistic achievements. Although he would eventually settle in the north of the country, his landscape painting transcended specific geographical terrains as Prendergast’s interest and focus lay more with rendering the intrinsic essence and spirit of a place rather than in representation of a locality per se.

Following encouragement from an inspirational art teacher, he won a scholarship to the Cardiff Art School before securing a place at the prestigious Slade School in London. Whilst at Slade, he came under the tutelage and influence of some of the most important figures in the British postwar art scene, Frank Auerbach, Euan Uglow and Michael Andrews being prominent, amongst others. Even though Prendergast was later to take up his own teaching positions at Liverpool College of Art and Coleg Menai, he remained primarily a studious practitioner of his own developing artistic craft.

Widely acknowledged as an acute observer and superb draughtsman, Prendergast’s best work is characterised by a masterly use of form which is allied to a lavish and inventive manipulation of colour. The quality of his work is recognised both nationally and internationally and following the death of Sir Kyffin Williams, Prendergast was subsequently celebrated by the public and critics as the foremost landscape painter in Wales. Fiercely proud of his roots, personal and artistic, the subject of Welsh identity, community, and the relationship of the people to the land, are recurring themes in his painting.

The recipient of several major art prizes, Prendergast’s work is held by the Tate and the British Museum. For many years he was represented in London by Agnew’s prior to latterly exhibiting at Messum’s. Awarded commissions by the National Trust and the National Museum of Wales, a major retrospective of his work was held at the Welsh Museum of Modern Art in the year prior to his death. 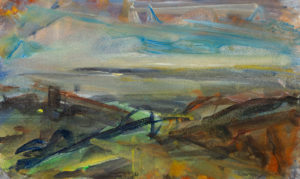