Ken Kiff was a renowned figurative artist with an international reputation and his body of work continues to receive posthumous critical acclaim. Having attended the Hornsey School of Art in the late 1950s, he subsequently taught at the Chelsea and Royal College Schools of Art respectively.

Steadfast and unswerving in his ideas about painting, his work can be viewed as the antithesis of prevailing trends associated with Minimalism and Conceptualism. In contrast, Kiff’s work possesses a lyrical and poetic quality with a particular accentuation of the limitless possibilities in colour relationships.

Often emanating dreamlike characteristics, his paintings suggest a chimerical world where illusion and fantasy interplay in a theatre of distorted perspective, proportion and scale. In this respect, the influence of Chagall, Miro and Klee is clearly identifiable in the development of his own sensory vision.

In 1991, Kiff succeeded Paula Rego and preceded Peter Blake as ‘Associated Artist’ at the National Gallery for a two year tenure. Similarly, the same year also witnessed his election as a Royal Academician, each appointment recognising both his artistic integrity and his increasing critical reputation.

Ken Kiff’s work has been exhibited widely at galleries across the United Kingdom and in London at Marlborough Fine Art, Fischer Fine Art and the National Gallery, amongst many others. His work is held in numerous public and private collections including the Arts Council and the Tate. 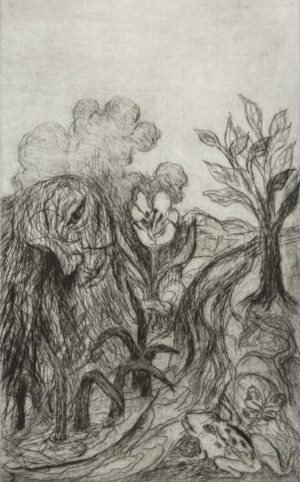 Frog figures and flowers at a stream