Norman Adams, the former professor of painting in the Royal Academy Schools, professed a lifelong admiration for the German expressionists, notably Kirchner and Nolde, and the Belgians, Permeke and Ensor. Later in life, it was, perhaps, Van Gogh who most preoccupied his thoughts.

Adams work continued a rich tradition of romantic visionary painting more frequently encountered in Britain than elsewhere. There are close links between his output and that of earlier English painters, such as Blake and Turner. Born in London, Adams went to Harrow School of Art, from where he won a scholarship to the Royal College of Art (RCA), just before being called up for military service. When Adams left the RCA in 1951, he was beginning to form the view that "art was not just a matter of painting objects, but getting beyond objects".

He taught at St Albans art school, and designed decor and costumes for ballets at Sadler's Wells and Covent Garden. At this time he began to leave London whenever he could to paint landscapes in Yorkshire and Ireland. In 1956, Norman and his wife Anna bought a cottage at Horton-in-Ribblesdale, in the Yorkshire Dales, where he built a spacious studio overlooking the edge of the Pennine Way. His affinity with the elemental landscape led him and Anna to the Outer Hebrides; from the mid-1960s, he spent every summer painting on the island of Scarp. Adams and is wife also travelled to Provence which they regularly returned to each summer inspired by the re-reading of Van Gogh's letters.

Following a trip to Italy Adams became influenced by Giotto's frescoes at Assisi and Padua and began a series of paintings inspired by religion, mythology and mysticism. In the 1970s, Norman produced murals for St Anselm's church, Kennington, south-east London (which he regarded at the time as his major achievement), the ceramic reliefs of the Stations of the Cross for Our Lady of Lourdes Roman Catholic church, Milton Keynes (1975-76), and an even more impressive series of paintings of the 14 Stations of the Cross commissioned for St Mary's Roman Catholic church, Manchester.

He held senior teaching posts at Manchester and Newcastle before becoming keeper of the Royal Academy Schools in 1986, and professor of painting from 1995 to 2000. 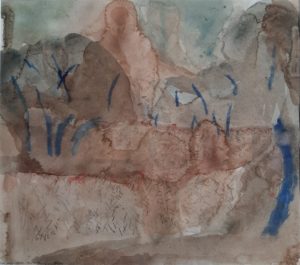