Douglas Litterick Swan was born in New Britain, Connecticut, to Scottish parents, though moved to Carnoustie, Angus, on the east coast of Scotland at the age of six. After completing his National Service, Swan studied at the Dundee College of Art (1943-53), where his teachers included the landscape painter James MacIntosh Patrick and Hugh Adam Crawford. Swan took a brief residency at Patrick Allan Fraser's Hospitalfield House, Arbroath, where he studied under Ian Fleming and received a Postgraduate Diploma; he also studied at Trinity College of Music, London.

Swan began exhibiting at the Royal Scottish Academy, and, in 1954, was awarded their scholarship to study in London. It was there that he met the artist William Scott, with whom he formed a lasting bond, the two painting together in Somerset and Cornwall. In 1957/8, Swan was awarded a British Council scholarship to study in Italy, where, in Milan, he enjoyed the vibrant contemporary art scene of the city provided by figures such as Lucio Fontana, Enrico Castellani and Roberto Crippa.

In the late 1960s Swan moved to Switzerland with his wife Barbara, nee Kückels, and established himself as an important abstract painter. After his first exhibition in Germany, in Bochum, the couple decided to move to the country, settling in Bonn, at first in Mozart, and then in Göbenstrasse. Despite his continental focus, throughout his life, Swan would often return to his parental home near Arbroath to continue to work and draw inspiration. In 1986 he was awarded the annual Art Prize of the City of Bonn (Kunststipendium des Stadt) a major prize that is still given. Douglas Swan died in Bonn on 7th June 2000, a result of a traffic accident. Two years later, the donation of a number of works from the Estate was accepted by the Museum of Bochum.

During his career, Swan showed with the Scottish National Gallery of Modern Art, Edinburgh; Young Contemporaries, Whitechapel Art Gallery; London Group; Artists International Association; Stone Gallery (known for their connection to LS Lowry); Waddington Gallery; Gimpel Fils Gallery; and had a series of solo exhibitions in Italy, Belgium, Germany and Switzerland. His works are held in public collections in the UK, Brazil, Germany, Switzerland and the Netherlands. 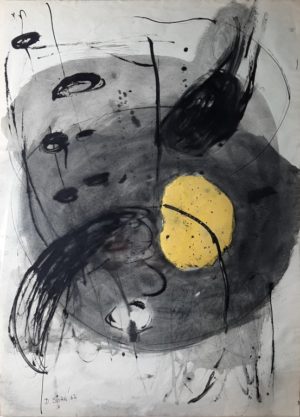