Although born in the south of England, Nicholas Horsfield is synonymous with the district of Merseyside and, in particular, the city of Liverpool where he taught drawing, painting and art history at the College of Art between 1956 and 1982. Of course, this is not to say that his distinguished output is ‘Merseyside-centric’ as his body of work transcends geographical categorisation and topographical limitations.

Born in 1917, Horsfield attended the Royal College of Art before embarking on a series of sojourns abroad which included both teaching and army service. These cosmopolitan experiences helped to shape and reinforce his own artistic roots which acknowledged the influence of the tradition of European figurative painting, whilst at the same time embracing and absorbing the new approaches to art offered by modernism and abstraction, Walter Sickert and Nicolas de Stael both being significant influences in this regard.

Although working across many genres, Horsfield was by disposition a landscape painter and his best work is characterised by a command of mark making and control of colour that gives his painting a freedom and solidity which ultimately eclipses any transient or fashionable artistic conventions. A periodic visitor to Dieppe over many years, his semi-abstracted French landscapes, with their familiar tropes and motifs, owe a debt to the influence of French art but yet speak more loudly of Horsfield’s wider accomplishment.

Nicholas Horsfield exhibited in solo shows across the United Kingdom and Europe prior to being awarded a retrospective at the Walker Art Gallery, Liverpool, in 1997 and his work is represented in many public and private collections. An innovative artist who earned the respect of peers, critics and students alike, Horsfield left a legacy on the Merseyside arts scene which both continues to this day and casts its ripples far beyond. 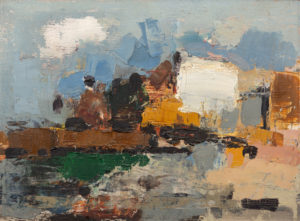 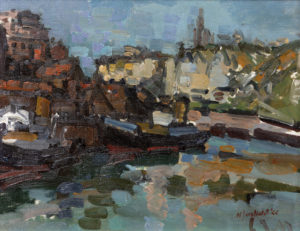 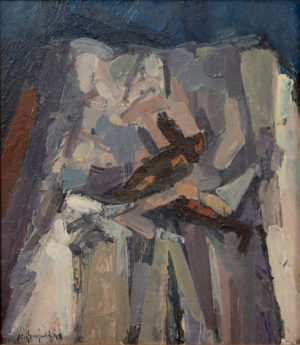 Rotting carrots on the financial times