Richard Cook is a critically-acclaimed British painter who is currently based in Newlyn, Cornwall. Having initially trained at the prestigious St. Martin’s School of Art in London from 1966 – 70, he subsequently attended the Royal College of Art until 1973. At the Royal College of Art he was taught and mentored by Leon Kossoff, a seminal figure in postwar British painting, and the two artists shared a studio for several years in the early 1970s.

Inspired by the natural world in his work, and influenced by spending his early formative childhood years in Sri Lanka, Cook has developed his own artistic voice which now finds embodiment through his interpretation of Cornish landscapes and seascapes.Tate St Ives recognised his unique and distinctive style with a solo show and the acquisition of a significant painting for the collection in 2006.

Predominantly working in oils and often employing an impasto technique, Cook cites the power and influence of memory as being integral to his artistic practice and methodology. In this regard, the malleability of the paint becomes a medium for reflecting and exposing the hitherto concealed memories within him.

Initially shaping abstract form with a directness of expression which emanates from previously created memories, Cook’s work is a powerful rendering of his ‘seen world of nature’ which exists symbiotically with the sensations and feelings of his remembered experiences.

Richard Cook is an important British painter whose work is held in the following collections: Tate Gallery; Arts Council of Great Britain; The British Museum; Manchester Art Gallery and Deutsche Bank, London. He has been exhibiting nationally for over 25 years and has been the recipient of awards from both the British Council and the Arts Council. 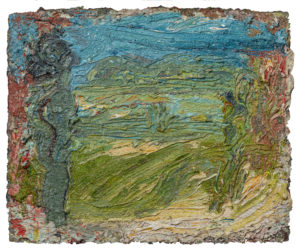 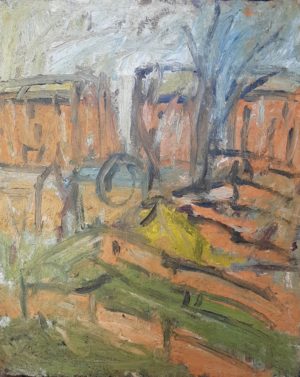 View from the Studio