He moved to Paris to become an artist, enrolling at Atelier Dix-Sept, Stanley William Hayter's engraving school, where he learned etching. He worked alongside artists including Max Ernst, Oskar Kokoschka, Joan Miró and Pablo Picasso. In 1935, Trevelyan bought Durham Wharf, beside the River Thames in Hammersmith, London. This became his home and studio for the rest of his life and was a source of artistic inspiration to him. He became a confirmed Surrealist and exhibited at the International Surrealist Exhibition, held at the New Burlington Galleries in London.

From 1950 to 1955, Trevelyan taught history of art and etching at the Chelsea School of Art.

From 1955-63, Trevelyan worked at the Royal College of Art and became Head of the Etching Department. Because of his enthusiasm in his work and the desire to share it with others, Trevelyan became a highly influential teacher, with students including David Hockney, Ron Kitaj and Norman Ackroyd. He was an important leader of modern print techniques and today is regarded as a silent driving force behind the etching revolution of the 1960s.

In 1969, he produced the Thames Suite, a collection of 12 views of the Thames from its upper reaches in Oxford and Henley-on-Thames down to the tidal stretches of London and the Estuary.

His work has been exhibited at Waddington Galleries, New Grafton Gallery, Bohun Gallery, River and Rowing Museum in Henley-on-Thames, the Bloomsbury Gallery, Messum's, the New Burlington Galleries in London, and Pallant House Gallery, Chichester, among other places.

In 1998 a major Retrospective 'Julian Trevelyan: The Imaginative Impulse was held at the Royal College of Art which subsequently toured to Royal West of England Academy, Bristol; Laing Gallery Newcastle, and Mercer Art Gallery, Harrogate with accompanying catalogue published by Bohun. Catalogue Raisonne of Prints edited by Silvie Turner launched at Royal Academy.

'Julian Trevelyan Retrospective of Etchings' at Bohun Gallery with opening of River & Rowing Museum mounting 'Julian Trevelyan: River Thames Etchings'. To celebrate the centenary of his birth, an exhibition of his prints was held at Pallant House Gallery in Chichester from 10 May to 13 June 2010. 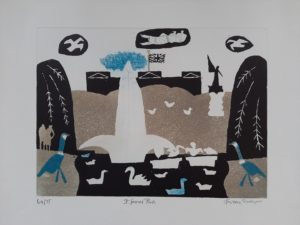