David Tindle RA is recognised as one of the most eminent and influential figurative painters of his generation. Having been born in Huddersfield in 1932, as a young man Tindle developed an association with a group of important London-centric postwar painters including Francis Bacon, Lucien Freud and Keith Vaughan. The relationships with these older and more established artists were to play a significant role in the early artistic development of Tindle, both stylistically and technically.

As his work has evolved, Tindle’s maturation has been characterised by a willingness to challenge his own practice and, as such, his oeuvre is not easily categorised. Consequently, Tindle’s output constitutes a body of work which is substantial in its breadth and depth whilst at the same time retaining an exquisite richness in quality.

His experimental and progressive approach to painting saw Tindle expand his range of materials and adopt the traditional technique of egg tempera in the 1970s, the medium proving apposite for producing the intensely detailed works which he captures with a fine brushwork. Whether working in oils or tempera, Tindle’s later work is notable for the presence of recurring subjects and motifs such as windows, mirrors and doors, the imagery often assuming an almost ethereal or at times surreal essence, reflecting perhaps the artist’s musings on memory and mortality.

David Tindle studied at Coventry School of Art before taking up teaching positions at Hornsey and Byam Shaw Schools of Art respectively. He was appointed a visiting tutor at the Royal College of Art, where he remained until 1973, and was Ruskin Master of Drawing at Oxford University from 1985 – 1987. He was elected a Royal Academician in 1979 and was made a Fellow of the Royal College of Art in 1981.

Recognised by his peers and art critics alike as a serious artist, Tindle’s first solo exhibition was held in 1954 at the Piccadilly Gallery, London. Subsequent solo shows have been held throughout the United Kingdom and Europe, including regular exhibitions with both Fischer Fine Art and The Redfern Gallery. Amongst group shows in which his work has been represented have been those at the Hayward Gallery, Tate, National Portrait Gallery and The Mall Galleries, London. Retrospectives of his work have been held at public galleries in both Coventry and Northampton. David Tindle now lives and works in Italy. 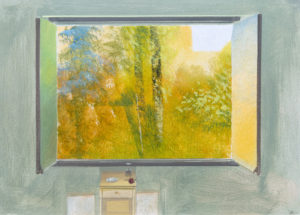